“Flower of a New Nile”

In the 1960s and ’70s, the predominant theme in Black poetry was anger and rage. The manuscript of the fourth collection by Naomi Long Madgett did not fall into that category. While Black poets had traditionally been rejected by White publishers, even Black publishers, concerned about potential sales, rejected or, at best, were lukewarm to Pink Ladies in the Afternoon. Naomi mentioned her frustration to a friend who was enthusiastic about her work. This friend and two others, who wished to remain anonymous, agreed to finance the publication of this book. Naomi, who has always felt that everything she writes reflects her racial awareness, came up with the name Lotus Press from reading about the Egyptian lotus. The poetry of African Americans, she felt, was a representation of Africa transplanted to this continent; thus, the motto, “Flower of a New Nile.” It was she who saw to the details of finding a printer and seeing the book into production.

Another early project was a collection of twenty “poster-poems” by living black authors, intended for use in secondary schools as a means of demonstrating the rich variety in African American poetry at a time when many white teachers resisted it, often with the comment, “If you’ve read one, you’ve read them all.” Feeling that both Black and White students were being deprived by this attitude, Madgett selected and duplicated these poems herself, using colored ink and colored cover stock. She then wrote a teacher’s guide to be: included with Deep Rivers: A Portfolio, suggesting ways this collection might be used to introduce a unit of poetry to an English class. She included discussion questions for each poem, as well as suggested reading and writing activities which could be related. The National Council of Teachers of English ordered several hundred copies of this set and distributed them nationally.

Gradually people began to notice Madgett’s publishing activities, and before long, she was receiving manuscripts from all over the country. Sensing the need for a showcase for the work of serious poets, especially African Americans, and wishing to ensure their integrity and independence, regardless of style and subject matter, she became more and more involved, selecting manuscripts of high literary quality and printing and distributing them at her own expense. Never under the illusion that well-crafted poetry would produce financial profit, she took on the commitment of the press as a labor of love. She was aware that although poetry relates significantly to the experience of every culture in the world, it does not enjoy a popular audience in this country. As a result, the major publishers bring out few books of poetry, subsidizing the cost with best-selling novels that are often without permanent value. Knowing the difficulty of getting published by a reputable house-without any requirement that they contribute to the cost-poets were willing to accept copies and discounts in lieu of royalties. Outstanding artists and photographers, too, frequently contributed their work for book covers or occasional illustrations in return for contributors’ copies.

I take refuge in my work. I am happy that maybe a few of my poems will live on after I'm gone and have meaning for people, for generations to come. And I'm happy to have published a number of other poets. I believe that is a more important achievement than my getting published as one person.

A full professor in the Department of English Language and Literature at Eastern Michigan University, commuting from her home in Detroit and trying to find time for her own writing, Naomi nevertheless managed to publish from three to seven books each year, supplementing book sales with her own funds to keep the press alive. Resources from the sale of her own books, either published or reprinted by Lotus Press, also helped to sustain the press. But simply producing the books was only part of the task. She also worked with authors on editing problems, sent out promotional materials and review copies, pasted up pages, typed invoices, packed and shipped books, kept records, handled correspondence, and made reports. Clearly some change was necessary.

The work load nevertheless increased. The number of unsolicited manuscripts multiplied as the name of the press became more widely known. Naomi Madgett read and responded to these and spent a considerable amount of time answering questions, providing information for aspiring poets, and occasionally conducting workshops in writing and publishing. The. processing of invoices, which the warehouse did not do, was eventually handled by computer; then the paperwork was sent to the warehouse for shipment with the order. In 1984, Madgett felt it necessary to retire from teaching in order to comply with the ever-increasing demands of the press. While there have been a few volunteers and interns, Lotus Press, Inc. has remained much more of a one-person commitment than it should be, mainly because of a shortage of funds. Naomi has never received a salary and still pays some of the expenses of the press out of her retirement income. Writing grant proposals requires more time than she can afford to spend, so the critical need for a salaried staff person who could free her for more creative contributions has gone unfulfilled.

In spite of its ongoing struggle, Lotus Press, Inc. enjoyed 43 years of dependable and uninterrupted service with the publication of more than ninety titles, many of which are still in print. These publications have small but worldwide distribution, and some are being used as required reading in high schools and colleges. Many have received excellent reviews in prestigious journals. Some of the authors’ careers have been enhanced as a direct result of their having been published by Lotus, a name which commands respect from those familiar with the quality of its offerings. The highly acclaimed twentieth anniversary anthology, Adam of lfe: Black Women in Praise of Black Men, represents a timely breakthrough in the way the African American male is viewed, especially by African American women.

Never a commercial success, Lotus Press grew and maintained its independence largely without the aid of grants. It was supported mainly through volunteer help and tax-deductible donations to The Friends of Lotus Press.

In 1993 The National Naomi Long Madgett Poetry Award was established to recognize and publish an outstanding manuscript by an African American Poet, sponsored and funded by Lotus Press. Each winner receives $500.00 and a discount on book sales. The Naomi Long Madgett Award now continues with submissions, selection and publication of the winning manuscript being handled by Broadside Lotus Press. Poets who wish to submit manuscripts for consideration for the competition should contact Broadside Lotus Press for award guidelines. A collection of the Naomi Long Madgett Poetry Award winners’ books are available at Wayne State University Press, along with Madgett’s recent works.

Since 1995, INSIDE OUT Literary Arts Project in Detroit places professional creative writers as teachers and mentors in Detroit schools to engage K-12 students in the pleasure and power of literary self-expression.

From 2001 – 2013 Madgett judged poems from Inside Out students and presented winners with the Lotus Press High School Poetry Prize, $100, and a broadside of their poems that she created.

At age 92, Naomi had single-handedly published over ninety books of poetry by mostly African American poets and had ten books of her own poetry. Still, after 43 years in business, Lotus Press still operated from her basement office. Ever mindful of her mission, she sought to ensure that the legacy of Lotus Press and the annual Naomi Long Madgett Poetry Award would continue.

Madgett and Randall had been longtime friends, fellow poets and publishers, and Detroit’s first and second Poet Laureates. Given the importance of each to African American poetry and poets, the merger was historic. 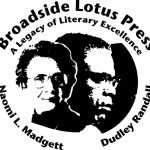 On the Occasion of the Broadside Lotus Merger
Detroit Main Library
March 31, 2015

The 90+ Poets of Lotus Press Include:

You Are My Joy and Pain is Naomi Long Madgett’s latest and possibly most endearing poetry collection. Bill Harris, a 2011 Kresge Foundation Eminent Artist, said of the book, "Even with the evidence of over a half-century or more of first-rate poetic artistry by Madgett, this collection is a breath-arresting surprise and delight. Poem-by-poem and section-by-section amaze. Each poem in the collection is a master class in technique and in her ability to transpose an idea into a tightly composed example of the craft of poetry."

You Are My Joy and Pain receives its name from the Billie Holiday song "Don’t Explain" and is divided into three parts. The first part, "A Promise of Sun," contains fourteen poems relating to the hopeful and joyful beginning of a new relationship. The second part, "Trinity: A Dream Sequence," consists of twenty poems with religious imagery and encompasses both the beginning and the end of a relationship. The third part, "Stormy Weather," includes thirty-two poems that relate to the heartbreaking experience of a love gone wrong. These are not love poems in the abstract—the richness with which Madgett writes hints at the firsthand experience of a lifetime of loving.

While several anthologies of love poems exist in the world, it is rare to find a single-author collection that so closely examines love in all of its messy and beautiful layers. Readers will identify with the hope and disappointment that Madgett presents in these poems.

This will close in 0 seconds

Octavia and Other Poems

Travel back to Guthrie, Oklahoma with award-winning poet/publisher Naomi Long Madgett. Learn about a dead aunt's legacy and the coming of age of her impressionable niece. This film juxtaposes a poetry reading by Madgett, a 73-year-old African American woman, with footage of interpretive art works created by Detroit artists who were inspired by Madgett's poems. In addition to the original artwork, the film makes use of still photographs, historical film footage and music. A cameo appearance by James Earl Jones is just one of the many noteworthy moments in A Poet's Voice.

Madgett's poetry speaks with lyric tenderness about her efforts to step out of her Aunt Octavia's shadow and into her own light.

This will close in 0 seconds